What a great couple 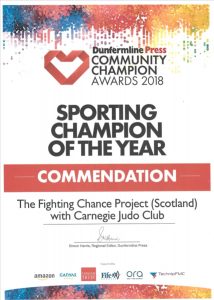 of weeks for Fighting Chance Project (Scotland) and Carnegie Judo Club with the awards and recognition received.

This award for the Dunfermline Press Community Champion 2018 was given in recognition and as a special commendation by the judges for the work we do with young people in the Dunfermline area.  As with the the SportScotland ActiveSchools Fife awards we are delighted to have been recognised for helping improve the outcomes of young people in the schools, judo club and local community.

In addition the funding received from Spirit of 2012 has allowed us to run active girls classes aimed at improving participants overall health and wellbeing using low intensity judo, movement and fitness with time given to social interaction between peers and coaches.

hank everyone who have placed their trust in us and supported us over the last 3-4 years.