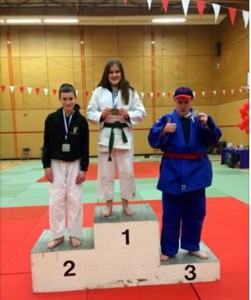 Well done to Olivia and Edwin Barron and Struan O’Keefe who competed and medalled in the 2016 East of Scotland Special Needs judo event.   All three are pupils at Woodmill HS and members of Carnegie Judo Club, Dunfermline.   Struan started judo through the work Fighting Chance Scotland and Carnegie Judo Club are doing with Woodmill High School’s DAS group.  We are delighted with the progress all of the pupils are making with the Yellow Belt Challenge and these three are shining examples of the difference judo can make to young people’s confidence, fitness, co-ordination and overall health and well being.