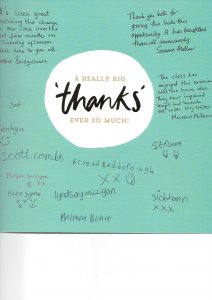 On Wednesday 1st June, 2016 class 4A2 invited Jim and Iain their judo instructors for a small tea party in class. The class have enjoyed their judo sessions so much this year that they felt they wanted to give something back. 4A2 had been working on a National 2 unit of work about enterprise and this involved them inventing a new company called Class Sandwiches. After lots of research they began to provide an ordering service on a weekly basis for staff in the DAS. They gathered orders, prepared and delivered sandwiches for five Mondays and this involved lots of work across a variety of curricular areas.

They made a huge profit of £184.00 and decided to give some of it to Fighting Chance and use the other money for a treat for themselves before change of class and timetable. Jim and Iain joined us and it was quite a surprise for them when Jack presented Jim with the cheque for £100 and some letters from the pupils.

Well done 4A2 for all your efforts both on and off the judo mats.